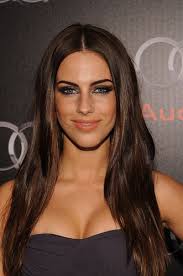 It started for me with a the simple headline, " Who exactly is Jessica Lowndes?"

Well, I already knew that answer. My ability to soak in pop culture information and my love of the Hallmark and Lifetime movie channels had already given me the knowledge of who she is. (Lowndes starred alongside Will Ferrell and Kristen Wiig in the their Lifetime movie collaboration last year. Lowndes also appeared in a Christmas movie on the Hallmark channel that I may or may not have watched.)

Even though I was aware of Lowndes, I clicked on the article. What I was treated to was the nugget that Lowndes, 27, was apparently dating actor/comedian Jon Lovitz, 58.

My initial thought: How did these two meet? Then I thought: Well, good for them. People find love all the time and as long as they are both consenting adults and happy, so be it. (Though, considering their gap in "stardom" one might wonder if she was just using him as a power play. And the shot of his hand on her inner thigh wasn't really necessary.)

Entertainment websites went crazy with this story. Articles were being written based off of Instagram posts and speculation was that the two were engaged.

The internet was flooded with comments ripping into the two about their gap in age. The website Jezebel joined the circus, getting in on the action by basically ugly/gross shaming Jon Lovitz and assigning judgment on Lowndes for her choice in men.(A whole different topic entirely).

A love and need of celebrity gossip and style led to this sort of "news" dominating the entertainment news cycle for much of the morning and into the afternoon. Though there was the normal internet vile being spewed, Chrissy Tiegen came to the defense of Lowndes' and also planted the thought of trickery taking place.


I smell April fools on this lowndes/lovitz relationship but if I'm wrong whoops jk screw everyone f the haters do you, you two
— christine teigen (@chrissyteigen) March 28, 2016

And there it was. Lowndes would announce earlier this afternoon that the entire thing was a PR stunt to announce her new music video (of which stills were used as the bait in Instagram photos, I believe. I didn't actually watch the video). It was all an early April Fool's Day joke.

It was brilliant and a comment on today's "pump it out quick" hot takes before news even has a chance to settle. It also played perfectly on part of society's obsession with celebrities and their lives.

Lowndes (and I'm assuming a PR team) took advantage of this aspect and the hot button of older men dating younger women. They used it to their advantage to reel in outlets like CNN. I'm sure the video on Vevo has garnered a lot of hits, mostly to give a listen to a woman many had never heard of before today.

Though technically not news, Louis CK's email to his subscriber list last week, detailing how he reads the newspaper still because it usually gives him detailed and researched information, plays along perfectly with the amount of "news" that gets published immediately on the internet without giving much thought to what is actually going on. Though there are definitely great websites out there (news outlets included) that have detailed articles (many of which also appear in print), he is correct in that many websites jump the gun just to deliver a brash, in your face headline without very little substance.

I get it. I do. I'm on Twitter and I occasionally drop hot takes, trying to be the first to crack a joke or state my opinion. It's the world we live in. The difference, though, is that I'm not necessarily trying to break news and so many different sites and people are. They want to be the first to report something. They want to be the lead on something with an opinion, validated or not, and take the internet by storm.

Today, Jessica Lowndes did that by using these people to her advantage. If celebrity obsession didn't exist, this idea that she was dating Lovitz wouldn't have even gained much traction. To think, Lowndes isn't even a Brad Pitt, George Clooney, Jennifer Aniston, or Jennifer Lawrence level of celebrity. Would she had received this much attention if she was?

This wasn't the first time something like this has happened and it certainly won't be the last. Whether it be in pop culture, sports, or politics, news is going to be written on or spoke about quickly. There are certain situations in which this is needed. A celebrity's love life is not one of them. They may choose to live life in the public eye, but in the end, it is still their own life to live, even if it turns out to be a clever April Fool's Day joke.

April Fool's Day celebrity obsession hot takes Jessica Lowndes Jon Lovitz Lifetime Television shaming the internet
Jason Haskins
I am a playwright, screenwriter, novelist. My novels "The Dragon Princess" and "The Blue Gem" are both available at the Kindle store on Amazon. To learn more, be sure to visit jason-haskins.com or follow me on Twitter: @jasonrh_78