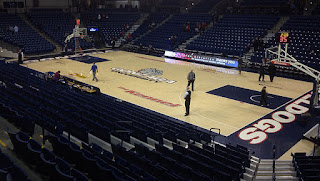 It's a Cinderella story 17 seasons in the making. 17 consecutive seasons of "will they or won't they?" From one seeds to eleven seeds, the Gonzaga Bulldogs have been labeled the 'ultimate Cinderella'.

Is this the season they finally breakthrough to the Final Four?

All signs currently point to yes.

Ranked number one for the second straight week. A 25-0 record. Running opponents off the court while playing outstanding defense. A deep bench. Brewing in the wind could be the perfect storm of Gonzaga finally cutting down the nets in early April.

Under head coach Mark Few, the Bulldogs have appeared in six Sweet Sixteens, even ending with a 35-3 record in the 2014-15 season while reaching the Elite Eight.

A season after bowing out of the NCAA tourney during the sweet 16, 2016-17 was supposed to be another season in which Gonzaga had to fight to win the West Coast Conference. The team supposed to take them down--their nemesis in St. Mary's--found out earlier this season just how good Gonzaga is. The Gaels will get their chance at redemption on Saturday night when they host Gonzaga.

Gone were a host of players, including stars Kyle Wiltjer, Kyle Dranginis, and Domantas Sabonis. Yes, the Bulldogs had good players returning, but an undefeated record in February was not expected.

Instead, Gonzaga has been wiping the floor with their West Coast opponents. The 20th-ranked Gaels fell at Gonzaga by 23. In the eight games since that victory, the Bulldogs are winning games by an average of nearly 30 points. This number even includes their narrow ten-point win over BYU.

Senior Przemek Karnowski is the leader of the bunch in experience and second in points. Karnowski averages 12.1 points and 5.6 rebounds per game while shooting 61%. He is doing this in just under 22 minutes per game.

Freshman Zach Collins aims to do even better, scoring 10.8 points per game and leading the team with a 65% shooting percentage. Collins does so in just under 18 minutes per game.

Jordan Mathews and Josh Perkins have combined to make 100 threes this season, nearly half of the team's total. They are connecting on 40% of their three-point attempts.

Of course, the man powering the Gonzaga engine is junior Nigel Williams-Goss. He leads the team in points (15.8), rebounds (5.9), and assists (4.7). He is a "do everything" type of player and is one who should be at the top of many All-American lists come the end of the season.

When a men's team is undefeated this late in the season, the questions begin to arise. How long can they keep it up? Is it better to lose now in order to see how a team responds?

Not since the 1976 Indiana Hoosiers has a men's college basketball team gone undefeated through an entire season. In recent years, the Wichita State Shockers and Kentucky Wildcats have entered the tournament undefeated, with both eventually losing.

Many will call to Gonzaga playing in a weak conference as a reason they are overrated. Yes, the West Coast Conference has only four teams with winning records, but the Bulldogs aren't exactly narrowly winning games. This can be detrimental, in some aspects, as one might wonder how a team will respond in a close game. With these Bulldogs, battle tested may not come into consideration with they are winning games. Even so, they have the leadership at top to hopefully withstand the eventual tough contests they'll be involved in.

The chase for the title appears to be wide open. No clear-cut favorite has emerged. Kansas and Baylor are slugging it out in the Big 12. Villanova, the defending the champion, has experience abound and is still playing well. The usual suspects in the ACC usually send one or two teams deep into March and the Pac-12 is playing at high level this season (at least near the top of the conference).

There is no reason why Gonzaga shouldn't stand tall at the end of the season. A number one seed is in sight. It might still require an undefeated record (or at the very least, only suffering a loss in the WCC title game). All aspects of their game are pointing to the Bulldogs peeling off the Cinderella label for good.

Adam Morrison. Kelly Olynyk. Ronny Turiaf. Dan Dickau. Blake Stepp. Casey Calvary. Matt Santangelo. Richie Frahm. Cory Violette. J.P. Batista. Josh Heytvelt. All are names--among many I'm probably forgetting, including possibly a popular one I should be remembering--that have helped pave the way to today's team. The Gonzaga Bulldogs have been a model of consistency over the years, a program that should be considered along with the elites.

Continue to do the work and they, too, can finally be the last team standing, enjoying their one shining moment among the stars.
Adam Morrison college basketball Gonzaga Bulldogs Kelly Olynyk Mark Few NCAA Nigel Williams-Goss