Monologues for Christmas and winter 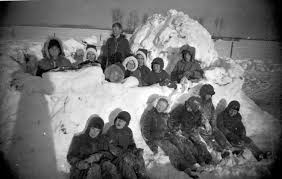 Every once in awhile, I like to drop monologues onto 'The Journey of Now' blog. The following were written roughly three years ago and today I sat down to revise them.

CHRIS
The Yule log burns on Channel 11. The Christmas presents are wrapped and I finally sit down to enjoy a glass of ice cold eggnog. The snow has been falling for hours, there must be at least six inches of it out there, and the sky shows no signs of letting up.

The yule burning behind me, I stare out the window and watch the snow gently fall in the night. The city is silent. No traffic whatsoever. The street lights illuminate the freshly fallen snow. I know it’s late, I know its cold, but all I want to do is go outside and build a snow fort. Or maybe build a couple of snowmen. Snow women? Snow people? Whatever they are, all I want to do is go out into the snow and do something to recapture my youth.

I love it all. The music, the decorations, and the presents. Santa here, Santa there, Santa everywhere. It’s pure bliss. And yet, as a functional adult, I am supposed to have lost that spirit. Why? I look forward to the same things I did as a child. Why should I change just because society says I should? There is something fundamentally wrong if society wants to frown at me for wanting to build a snow fort.

That’s just what I’ll do. I’ll turn on my porch light and outdoor Christmas lights. I’ll put on my jacket, gloves, and scarf. I’ll listen to Christmas music and build the best snow fort this block has seen. I will do all of that…as soon as this eggnog is gone. Can't let a good glass of eggnog go to waste. Then I’ll build the best snow fort ever and maybe catch a glimpse of Santa. Hey, it’s close to midnight. You never know…You never know.


It’s started again. Here we are, November 1st and the department store has already started playing Christmas music. It is far too early to be walking in a Winter Wonderland and jingling my bells. People haven’t even taken down their Halloween decorations for Christ’s sake.

Don’t get me wrong. I enjoy the holidays. I like Christmas and I tolerate Thanksgiving. Tolerate is the key word. By choice, I travel to my sister’s house every year for Thanksgiving. She lives in Chicago. That’s about the only good thing about it. I get to see Chicago. Everything else is just stressful, you know? Here I am stuck in a house full of people. My parents are there. My sister is there with her husband and three kids. Three kids! Toss in a couple of in-laws and holiday cheer spikes through the roof. Ho, ho, ho; at least the whiskey keeps me jolly.

I honestly don’t see how she deals with all of those people. She does the same at Christmas, sans me. It’s hard enough putting on my fake nice and caring hat for Thanksgiving. I don’t want to do it again at Christmas. I fake my way through idle family chatter and the occasional “what are you doing with your life?” I’m not taking care of three screaming kids, that’s what.

I like the kids. I really do. Having kids are just not my thing. I am meant to be here for other reasons than to procreate. The kids are great. They really are. They like me, though. Maybe it’s because I’m just their crazy Aunt Laura. I play with them and we have a lot of fun. The time spent with them always flies by. They love me. To think of that makes me smile.

Maybe I will go see them at Christmas this year. I just have to get them to promise me no Christmas music. It’s only November 1st and I’m ready for Frosty to melt. Is that so wrong?