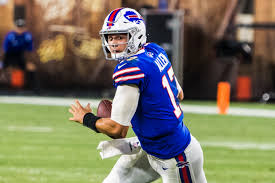 The 2018 NFL regular season is complete and along with it closes the first chapter to four of the five quarterbacks selected in the first round of last April's draft.

Back in September, one could have easily imagined the Baltimore Ravens and Lamar Jackson making it into the 2018 NFL playoffs.

My magical internet glasses that allow me to see all of you would notice there are very little hands raised. But being the starting quarterback for the playoff bound Ravens is exactly where Jackson finds himself heading into 2019.

Jackson was the last of the five rookie quarterbacks selected in the 2018 NFL draft to get a start. The other four taken ahead of him -- Baker Mayfield, Sam Darnold, Josh Allen and Josh Rosen -- all started in at least 11 games but all will be watching as they playoffs open.

This is not to say each didn't have varying degrees of success. One nearly led his team to the playoffs while a couple of others finished the season strong, giving fans hope for a bright future.

The group will certainly face new obstacles in 2019, especially with possibly four of them having new head coaches. Mayfield saw a coaching change midseason when Hue Jackson was fired. Gregg Williams was named interim coach, but it's possible Cleveland goes in a different direction.

Darnold and Rosen will have new coaches for sure, as head coaches Todd Bowles and Steve Wilks were let go. And Jackson, even with the Ravens in the playoffs, might have a new head coach if John Harbaugh isn't brought back.

Sean McDermott of the Buffalo Bills will be back, meaning Allen might be the only player with the same coach in year two.

Here's a little glimpse as to what each quarterback brought to the table in 2018 and some of their best moments.

The Cleveland Browns entered the 2018 season having only won once in their past 35 games.

Baker Mayfield equaled that total in game three of 2018 and, as the season progressed, easily showed why he was selected with the first pick in the draft.

By time the season wrapped, Mayfield and the Browns were 7-8-1, winning at least 7 games for only the second time since 2007.

Mayfield relieved an injured Tyrod Taylor in game three, leading the Browns to a defeat of the New York Jets. The rookie out of Oklahoma went on to start the next 13 games, going 6-7 in the progress and bringing a fire to Cleveland that hasn't been seen in years.

The Browns won five of their last seven games, with Mayfield breaking Peyton Manning's record for touchdown passes by a rookie by throwing his 27th in Sunday's game against Baltimore.

Mayfield finished with 3,725 yards and threw 14 interceptions in completing 63.8% of his passes. He also had seven fumbles, but threw for three or more touchdowns in four games and had a touchdown pass in all 13 starts.

A strong defense, a fantastic young running back, and a list of playmakers on the outside is giving Cleveland hope for the future. And Mayfield appears to be up to the task of shouldering heavy expectations.

Standing with a record of 4-5 -- and Joe Flacco injured -- the Baltimore Ravens season looked dead in the water.

Then Lamar Jackson took over.

Jackson had already been used sparingly, mostly to run the ball, and many assumed Jackson would simply be a placeholder until Flacco returned, at least for 2018.

Instead, the offense changed pace upon Jackson being inserted into the lineup and the Ravens went 6-1 over their last seven games. And with it, Jackson became the leader of the AFC North champions in his rookie season.

Jackson's major contribution was with his feet, rushing for 695 and five touchdowns. In his seven starts, he averaged 79 rushing yards per game.

Baltimore's offense was predicated on running the ball so a whole lot wasn't asked of Jackson in the passing game. He threw for over 200 yards only once (204), doing so in a 22-10 victory against the Los Angeles Chargers, who are also the Ravens' opponents in the first-round of the AFC playoffs.

The Buffalo Bills have been on a search for a franchise quarterback since Jim Kelly retired and many believe they may have found one in Josh Allen.

I'm not quite convinced, even though he's doing his best to win me over.

Battling an elbow injury, Allen ended up making 11 starts in 2018. He went 5-6 in these starts as Buffalo finished the season 6-10.

His grit and his legs are what carried him to success in 2018. Twice Allen rushed for more than 100 yards in a game, finishing the season with 631 rushing yards and 8 touchdowns.

He led the Bills to a road victory against Minnesota and delivered his best performance in the regular season finale against the Miami Dolphins.

Allen accounted for five touchdowns (three in the air, two on the ground) as the Bills won in a rout. He was 17-26 for 224 yards and carried the ball nine times for 95 yards. Allen also had one interception.

More passing games like this will be needed if Allen and the Bills are to rise in the AFC East. The Miami game was only the second time in 2018 Allen completed more than 60 percent of his passes. Right now, he's like Tim Tebow with a stronger arm. Improve on the accuracy -- which never reached 60 percent as a starter in college either -- and Allen might have a career more like Michael Vick's.

Allen finished the season with a 52.8 completion percentage and 10 touchdowns, 12 interceptions and 8 fumbles.

Unfortunately, Darnold only picked up three more the rest of the season as he finished 4-9 as a starter. The rookie out of USC missed three games due to injury as the Jets finished 4-12.

There wasn't much consistency on offense for the Jets in 2018, which might be remedied in 2019 after the firing of Bowles. As much as Darnold struggled in 2018, it was partially due to his top receivers being sidelined through much of the middle part and end of the season.

He did, however, have an impressive final four games. After leading the NFL much of the season in interceptions, Darnold returned from injury and only threw one in the season's last four games. During this span, he completed 80-125 (64%) for 931 yards and six touchdown passes.

Darnold had one of his best games in a 44-38 overtime loss to Green Bay in Week 16. He completed nearly 70 percent of his pass attempts and threw for 341 yards and 3 touchdowns.

Like Allen, Darnold finished strong and the two could be competing for AFC East supremacy for years to come (as long as Tom Brady eventually retires).

The lone first-round rookie quarterback out west was Josh Rosen of the Arizona Cardinals. The UCLA product ended up making 13 starts, going 3-10, as the Cardinals finished with a 3-13 record.

Rosen may be behind the eight-ball compared to the other quarterbacks but outside of veteran receiver Larry Fitzgerald and running back David Johnson, the Cardinals didn't have a lot of weapons.

Still, accuracy was an issue for Rosen. He completed 55.2% of his passes and finished with 14 interceptions. He only threw one touchdown pass in Arizona's last five games and hit the 200-yard mark only once in the last seven.

Rosen's best performance was a 18-15 victory over San Francisco. In that game, he threw for 252 yards and two touchdowns.

On the season, Rosen finished with 2,278 yards and 11 touchdown passes. Facing Seattle and the Los Angeles Rams twice a season won't help matters in Rosen's growth, but if his accuracy improves (much like all the others mentioned here, outside of Mayfield) he'll be a more than adequate NFL quarterback.

Perhaps just not the franchise quarterback Arizona was hoping for.

A successful NFL quarterback, especially one who will be long-tenured, is the dream of every NFL team. At this point, all five teams have their starter -- barring injury -- for the next few years.

From there? Only time will tell.