Another week, another challenge for Philip Rivers, Chargers 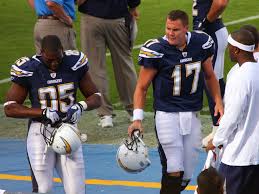 Two of the first three quarterbacks taken in the first round of the 2004 NFL Draft have Super Bowl Rings to their credit. Is 2018 the year Philip Rivers joins Eli Manning and Ben Roethlisberger as a member of the club?

Quarterback Philip Rivers of the San Diego Los Angeles Chargers has battled through a fair amount in his 15-year NFL career.

Traded on his first day for a player who never wanted to play in San Diego (Eli Manning), Rivers then sat behind future Super Bowl winner Drew Brees (with the New Orleans Saints in 2010) for two seasons before finally getting his shot.

In his 13 seasons as a starting quarterback, Rivers has won has many as 14 games in a season and as little as 4. He's played through injuries big and small and watched as superstars left San Diego for (seemingly) greener pastures. Rivers has also watched as his offensive line was a sieve for many seasons, allowing sack after sack, including 49 times in 2012.

Through it all, Rivers keeps smiling, keeps competing, and keeps toying with fans of the Chargers (for those who remain) on leading the franchise to the Super Bowl. He's been one of the top quarterbacks of this generation to not win the Super Bowl -- or play in one, for that matter -- leading to a label in some circles as this generation's Dan Marino.

It's one he can shake next month with a Super Bowl victory. But first, a division-round matchup with Tom Brady and the New England Patriots awaits.

If he can defeat Brady and the Patriots, it would mark the first time in his career Rivers defeated Brady. And it would add to a list of other demons Rivers has exorcised in 2018-19.

Whether it be missed field goals, unlucky bounces, injuries, or long fourth-down conversions, there has been a bit of bad luck and bad losses associated with the Chargers during Rivers' tenure. This has included regular season and playoff games alike.

Teams like the Patriots, the Pittsburgh Steelers, the Baltimore Ravens, and the Kansas City Chiefs have had the Chargers number over the years, especially in important games.

This season, Rivers and the Chargers defeated the Steelers, Ravens, and Chiefs at least once.

A few seasons back, there were rumors of Rivers retiring and not making the move with the team to Los Angeles from San Diego. The guy loved playing in San Diego and there was a feeling he was not happy with the team moving.

He of course stayed with the franchise. A new head coach, Anthony Lynn, joined the team and changes began to take place. The Chargers finished 9-7 in 2017, but this came after an 0-4 start. Los Angeles would also win six of their last seven games.

Rivers led the Chargers to a 12-4 (winning 11 of the last 13) record in the regular season of 2018. They are the fifth-seed, but were basically a win and a Chiefs loss away from being the number one seed. Rivers was his normally efficient self, throwing for 4,308 yards, 32 touchdowns, and 12 interceptions. It was his sixth-straight 4,000-yard season (and tenth overall).

Along the way, Rivers and the Chargers took down some of their old foes, starting with Roethlisberger and Pittsburgh in Week 13. Rivers led the Chargers back from a 16-point deficit and a 33-30 victory.

In years past, a comeback like that might have fallen short, leaving Chargers fans to again look back to their unfortunate and unlucky past. A victory that night, however, gave the tiniest of inkling this season was going to be different.

Two weeks later, the Chargers ended a nine-game losing streak against the Chiefs. And in the wildcard round of the playoffs, the Chargers defeated the Ravens, a team they once lost a game in which Ray Rice had a first-down conversion on 4th-and-29.

These victories won't mean much if Rivers and company can't do the one thing he's never done: get past Tom Brady.

If there's one team that has vexed Rivers throughout his career, it has been the Patriots. Rivers has picked up one win in eight tries (regular season and playoffs), but that victory was in 2008 while Brady was out injured and the Patriots started Matt Cassell.

Take away the Cassell game and that's a big goose egg for seven against Brady.

The toughest losses might have been in Rivers first two seasons as a starter. In the 2006-07 season, Rivers met Brady and the Patriots in the divisional round of the AFC playoffs. The Chargers were 14-2 and hosting the game, plus had LaDainian Tomlinson. San Diego even had the lead 21-13 when Marlon McCree picked off Tom Brady and... well, no need to rehash it. You can read all about it here, if you like misery.

The very next season, Rivers, on a torn ACL, led the Chargers to the AFC Championship Game against the Patriots. This time going to New England, Rivers and the Chargers held the Patriots to a season-low 21 points but couldn't muster much offense in only scoring 12 points.

The two teams haven't met in the playoffs since and last played in New England in 2017. The Patriots won 21-13 as Rivers threw for 212 yards.

For years, Rivers has constantly been on the fringe of the "greatest quarterback" conversation. In the AFC, he's had to compete with the likes of Brady, Roethlisberger, and Peyton Manning, while Aaron Rodgers, Drew Brees, and even the other Manning in the NFC have been discussed.

Add in a new batch of young stud quarterbacks and Rivers is looking at a tighter window to make it to the Super Bowl than ever before. A win at New England this week will move him one step closer, tying him with the furthest he's ever advanced in the playoffs.

A man named Brady stands in his way and, if can exorcise this demon, then the path for a Super Bowl appearance looks very bright.