A void where the sports world used to be 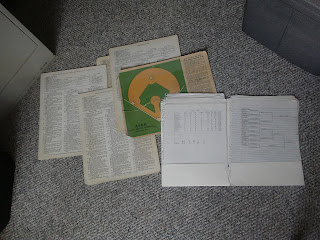 Sports, and the leagues and athletes we watch and follow, can be an altogether rewarding and heartbreaking experience. It's a void in entertainment not easily filled.

Trace the path of memories, finding the hazy shadow of an image that lingers. Pinpoint that moment when sports entered your life.

Three memories sink their claws in, each forever etched in the soul. There is the tender age of four, grasping a basketball, dad feet away, whistle planted between lips while the high school players run sprints.

A second is years later, a post t-ball game celebration where gumballs are handed out, tiny words corresponding with the best hit collected during the game. It's the first time the yellow gumball with the phrase "home run" landed in tiny, dirty hands.

A third is ripe with disappointment. The 1986 World Series, in which a simple ground ball bouncing through legs whipped up tears in a matter of seconds, not yet realizing there was still one game left to bring even grander sadness.

These are moments that define.


Sports have been a huge part of society -- especially on a large scale -- for a long while now. Participating in sports reached an apex for me back in high school. There was of course an occasional basketball league or soccer rec league, but on a whole, my career ended with the final bus trips my senior year of baseball.

Being a sports fan is deeply imprinted on my soul. I may not lace up the sneakers or swing a bat anymore, but my love for the game(s) has not waned. Watching sports, in person or on television (or phone, computer, etc.) have always been a nice escape. A passionate way to spend five minutes or five hours in a day, which is an exhausting feat in and of itself.

All of that has been temporarily been put on hold and, with it, a realization of how much sports are truly missed.

A world on pause

Roughly six weeks have passed since sporting events were canceled or put on hold. Normally, mid-April is prime for flipping the channel to a baseball game, letting it play out in the background before settling in for a few innings of intense watching.

This would have come after thrilling NCAA tournament action, where the Dayton Flyers might have made an improbable run on the men's side. Or, on the women's side, a Boise State Broncos women's team looking for their first win in their fourth-straight appearance.

On the horizon would have been the opening of the NBA and NHL playoffs, mixed in with the Masters and upcoming Kentucky Derby. All were the precipice of the Summer Olympics to happen in July.

All have been postponed, cancelled, or up-in-the air for a restart of some sort. The Olympics have been moved to the summer of 2021. There has been talk of the Masters in November and the NBA playoffs starting in July. Major League Baseball continues to try and find alternatives. College athletes have lost their spring seasons as have many high school athletes.

About the only thing hold sports fans attentions at the moment are the upcoming NFL and WNBA drafts. Both are going on as scheduled, though all done over phone calls and video conferencing.

Fans are so thirsty for anything sports related they'll watch a competition of H.O.R.S.E. between current and former NBA and WNBA players. No matter how thrilling, it will never top the greatest game of H.O.R.S.E. in the history of sports:

Sports irrevocably changed trajectory, possibly for at least the next season or two because of the coronvirus pandemic. We'll see a shorter baseball season and an abridged NBA playoff format, if the latter happens at all. And it's entirely possibly fans will not be allowed to attend events live, something we've already seen here in the United States and in some places worldwide.

The majority of sports leagues are in sleep mode, a hiatus with no restart on the horizon. And then there's pro wrestling.

Organizations like the WWE and AEW are still putting on shows, albeit taped ones in secure, closed locations. The WWE did return with a live show on Monday, a day before they were inexplicably deemed an essential business in the state of Florida. (Then on Wednesday, the WWE laid off upwards of three dozen superstars and staff.)

Wrestlemania 36 was a two-day event, matches taped ahead of time mostly at the Performance Center in Florida. A chance to lock in and really focus produced two of the best segments seen in a long time for the product. The Boneyard Match between the Undertaker and A.J. Styles capped off Saturday night with a bang, while Sunday's show we witnessed a Firefly Fun house match between Bray Wyatt and John Cena (a glorious spectacle that has to be seen to be believed).

When so much of a match depends on a crowd reaction, there were simple joys of wrestlers still dedicating so much energy and spirit in their matches. Some, like Nikki Cross, continued normal antics of stomping on the apron and screaming in effort to rile up her teammate.

While wrestling forges on without fans, baseball has returned in parts of the world coping with this new model as well. In China, games have started in empty stadiums, but players are still having fun with it:

Hilarious move by this #RakutenMonkeys player. Dude hit a home run, then gave a curtain call and launched a pack of masks into the empty stands. pic.twitter.com/IUMXPCGn6L
— Ben Porter (@Ben13Porter) April 15, 2020

Trace the memories, arriving in present day. Games and leagues may very well be played without fans to cheer and boo, at least in the immediate future. Every squeak of the shoe will be heard, the crack of the bat crisper than usual. It will be a new normal that will take getting used to.

In the end, there is a true realization that the sports are simply entertainment. There is no level of importance to say how much it means that sports leagues became unified in closing down shop. In the grand scheme of life, the safety of society takes precedence. And one day, generations of fans will again have the opportunities to form memories of their own, to find those moments of bliss in relation to their favorite sport. It may not be as soon as fans desire, but slowly, surely, the leagues will return.

Until then, we wait. We stay safe. Sports may not be a be-all, end-all in life, but we sure do miss it.
Baseball fans Pro Sports Fans Sports