NFL quarterbacks taken in first round of 2018 draft: Mid-point of 2020 season 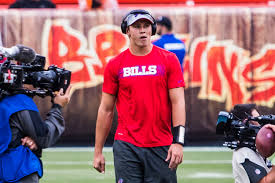 Five quarterbacks were taken in the first-round of the 2018 NFL draft. In this continuing series tracking their careers, we are now through nine weeks in season number three.

Rolling with efficiency, Josh Allen and the Buffalo Bills put on a show on offense in last Sunday's victory over the Seattle Seahawks.

They were so effective, Allen had just as many incompletions has times sacked.

Now, the alarming fact is that he went down seven times, but it was about the only thing that went wrong for Allen. He completed 31-38 passes for 415 yards – tying a career-high he set way back in week two – and tossed three touchdowns in the 44-34 victory.

The latest stretch for Allen and the other quarterbacks taken in the first round of the 2018 NFL draft was not the prettiest. Three of the quarterbacks found ways to keep winning, however, while one quarterback battled injuries.

And it is Allen who continues to top this select group so far in 2020, rising to the cream of the crop and leading the Bills to a first-place record in the AFC East.

His 2,587 passing yards currently place him third in the NFL. If you've been living under a rock this season, you'd be surprised to find that Allen is completing 68.9 percent of his passes while throwing 19 touchdowns and 5 interceptions. He's also still going to work in the ground game, with 241 yards and 5 touchdowns.

Despite being sacked seven times against the Seahawks, these had actually been going down. Heading into the game, the Bills only allowed four sacks in their previous four games.

Allen is outpacing himself in most regards as compared to this point in 2019. At 7-2, the Bills are one game better than they were through week nine last year. His passing stats have all improved, including passing yards (roughly 900 more), touchdowns (+9) and that dreaded completion percentage ( a nearly eight-point jump).

Having a receiver like Stefon Diggs (63 catches) certainly helps, but Allen has shown a maturity as he continues to master the Buffalo offense. It also means there is a new sheriff in the AFC East, where the Bills have a 1.5 game lead over the Miami Dolphins.

Whereas Allen has crossed the 300-yards passing mark five times in 2020, the next two quarterbacks on the list have had much more trouble reaching that threshold.

At 6-2, Lamar Jackson and the Baltimore Ravens own the exact same record as they did through week nine in 2019.

They haven't exactly been doing it with the same excitement and authority, especially in their last four games. At first blush, one wonders what might be going on but the team is still 3-1 over that stretch, showing that style points still don't mean as much as long as the team is winning.

There's been talk of Jackson not playing like an MVP, but in reality his numbers are only slightly off pace from the 2019 season. His completion percentage is down (64.3 to 62.9) and he's thrown for exactly 300 hundred less yards (1813 to 1513), meaning Jackson and the Ravens are connecting on less downfield plays. There has been some accuracy problems on these deep plays but also plenty of dropped balls to go around.

Only three times in 2020 has Jackson thrown for 200 or more yards, including only once since week two's victory at Houston, which was a 13-28 for 208 yards performance against Pittsburgh.

Jackson has been effective in the ground game, carrying the ball 79 times for 469 yards and scoring three touchdowns. Both down from last year, but that's partially because of the trio of JK Dobbins, Mark Ingram III, and Gus Edwards combining for 850 yards on the ground.

The Ravens should be playoff-bound still, but are currently looking up at the 8-0 Steelers.

The Cleveland Browns (5-3) find themselves only one game back of the Baltimore Ravens and in the thick of a playoff race. A steadier hand from Baker Mayfield, despite a season-ending injury to Odell Beckham Jr. and a Nick Chubb injury, has made the difference.

Yes, Mayfield has managed to be inconsistent, throwing five interceptions in his last four games after only throwing two in his first two. And yes, the Browns have only gone 2-2 in that stretch, pulling out victories over the Indianapolis Colts and Cincinnati Bengals.

Part of this reason is because of a solid running attack, led by Kareem Hunt and Chubb. Chubb, after missing the last four games could be back this week against Houston.

There haven't been a whole lot of 200-yard games this season for Mayfield, either, doing so only three times. He was pulled in a 38-7 loss to Pittsburgh (partially because of bruised ribs) and struggled to a 12-25 for 122 yards performance in a loss to Las Vegas (though the weather was abysmal that day as well).

Mayfield has thrown for 1514 yards in 2020, completing 61.4 percent of his passes, which is higher than it was at this point a season ago. Also impressive is that he's thrown 15 touchdowns and 7 interceptions, numbers that were at 7 and 12, respectively, thru week 9 in 2019.

Mayfield had an outstanding game against the Bengals, going 22-28 for 297 yards and five touchdowns. More games like that we'll be needed if the Browns are to finally get back in the playoffs.

There hasn't been a lot of good to go around for the 0-9 New York Jets in 2020, including for Sam Darnold. The injury-bug has taken its toll on Darnold yet again and he missed three of the last five games due to a shoulder injury.

The results haven't exactly been spectacular when Darnold has played.

He hasn't had a touchdown pass since week three and threw for a combined 253 yards in the last two games he's played. And he wasn't even in the game when the Jets played their closest game of the season, a narrow 30-27 loss to the New England Patriots.

One wonders if he'll even be in Jets uniform next season. New York seems primed to get the number-one pick in the 2021 draft, which could mean the selection of Clemson quarterback Trevor Lawrence if the junior decides to leave school.

Darnold has thrown for 1,045 yards and three touchdowns in 2020. He's completing 58.6 percent of his passes while throwing six interceptions.

Josh Rosen has not taken a snap in 2020 and is still on the practice squad of the 6-3 Tampa Bay Buccaneers.

Be sure to check in on the next update in this series following week 13 action.