The Undertaker: Ode to the Deadman 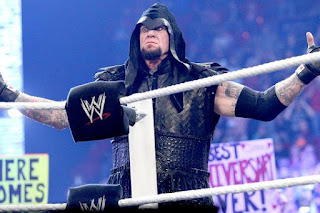 Retirement didn't arrive in the form of a post-match stunning announcement, but the apparent end of The Undertaker's in-ring WWE career was a celebration nonetheless.

Retirement in the world of professional wrestling is never really etched in stone and can often take on many forms. It can be as fleeting as a short break, simply written as part of a storyline or to allow for time off for a hard-working wrestler.

For The Undertaker, this past Sunday's celebration at Survivor Series in honor of a career well-spent seems a fitting end to his storied in-ring career.

'Taker. The Deadman. The American Bad Ass. One half of the Brothers of Destruction. The Phenom. The Lord of Darkness. He was known by many names and feared, appreciated, and adored as them all.

The Undertaker a.k.a. Mark Calaway is a legend among the greats whose impact on the world of professional wrestling over the last 30 years will not easily be forgotten. There are very few wrestlers – from the Attitude Era on – with only a few notes of entrance music that could make someone stop what they’re doing and rush to the television screen. The shattering of glass. "If you can smell...". Break the walls down. (*These are only a few examples. As I started writing, I couldn't stop. So I narrowed it down because there are A LOT more iconic entrance songs than I originally thought.)

There was always one, however, who got the juices flowing.

To this day, the first chimes indicating The Undertaker had arrived still sends chills down the spine, more so in recent years when appearances were few and far between and sometimes, a surprise.

These are chimes we will no doubt hear again. And while they will likely elicit the same reaction there will be a tinge of sadness knowing a new program isn't on the horizon. There will be no story on the road to WrestleMania or Summer Slam.

There will likely be a day in which that siren song again blares. Let's hope Vince McMahon can avoid making that call and Calaway can avoid temptation if the the call indeed arrives. This prolonged exit has had a nice closing arc, stretching from the Boneyard Match to Undertaker: The Last Ride and finally the retirement ceremony at the closing of Survivor Series 2020.

A better ending could have been played out in 2017 with The Undertaker's match (and loss) to Roman Reigns. Rumors of retirement were already swirling and the send-off he received – plus shedding and leaving behind his ring gear – from an adoring crowd meant a near-perfect ending, if it weren’t for the pesky ‘L’ that accompanied the match.

At that point, it seemed like The Undertaker was on his way out; a journey that began with is first-ever loss at WrestleMania three years prior to Brock Lesnar. Calaway, as it turned out, had three more years of sometimes good, sometimes bad, wrestling and storytelling to deliver fans.

On November 22, 2020, The Undertaker announced that it was time for him to "rest in peace". It was 30 years to the day – also at Survivor Series – that The Undertaker made his debut. Back then, I was at the tail end of my first love affair with what was then called the WWF.

My interest in the sport may have waned but that didn't stop me from knowing about The Undertaker and the late Paul Bearer. The ins-and-outs of the sport no longer mattered to me but The Undertaker simply transcended the world of wrestling and was an entity that was no likely known even if you knew wrestling or not.

Nine years later, I again slowly immersed myself into the world of professional wrestling once again. While some of the stalwarts from the 1980's were still around, it was The Undertaker who was part of the contingent of wrestlers who kept me entertained.

Even when he did switch things up as The American Bad Ass for that brief period. But with wrestling, it's often we see wrestlers flip from heel to face and back again. Or try out knew characters altogether. Sure, he rode in on a motorcycle and rocked a bandana, but he was still The Undertaker. The American Bad Ass only helped build on the lore.

Lore that is now legend. A legend who was a 7-time world heavyweight champion, a tag-team champion, winner of the Royal Rumble and winner of multiple Slammy Awards. (You're a nobody unless you take home a Slammy).

And 21 straight wins at WrestleMania, finishing his career at 23-2 in wrestling's grand event.

And for that, The Undertaker will always be on top, no matter how rarely we see him in the coming the years.

Thank you, 'Taker. Thank you.