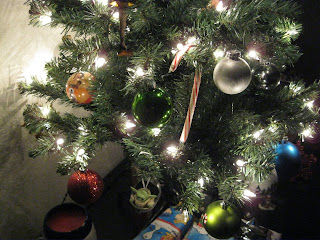 I have been staring at this screen for going on 31 minutes now. Occasionally I stand, proceed to walk around the house to jumpstart the mind. Return to the couch. Tap my fingers. Tap. Tap. Tap.
Afternoon turns into evening.
It's time for the annual Christmas letter and I struggle to reach a starting point. To begin with a first step usually starts the journey and propels it forward. I deleted about five different sentences over the course of 31 minutes...
...make that 34 minutes. Where does one even begin this year?
The year 2020. Am I right? 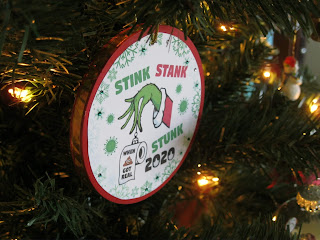 ornament by Kathy Kiefer
It's hard to believe we are already in December. Life was already going to be an adjustment in 2020, but – like for many around the world – the last nine months have been a lesson in "now, more than ever", a phrase I do believe I've heard over 14,000 times since March and one that probably never needs to be uttered again.
But I understand.
It was the weekend of March 13 when things began to truly change in the Boise area due to the pandemic. Days later, on March 16, my job sent people home, instructing us to leave by noon to work from home from what we initially thought would be two weeks. Two weeks extended to the end of April. And then to June. And once more until October, when it was finally decided to move our company fully remote. This meant no more going to an office and no more grabbing free drinks from the drink fridge. I am grateful to have a job still, but I do miss the social interactions that going to an office provides.
And to think, it was only a week prior this March 16 date that myself and two close friends got to meet the Beatles: 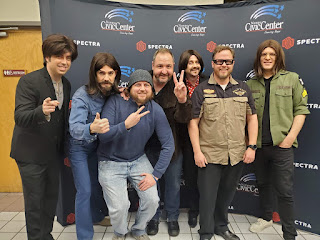 The same weekend of the 13th, the theater company I work with, Alley Repertory Theater, opened and closed a show all in a three-day span. Normally, a production with our company lasts 7 to 12 performances so there was much sadness about only getting three performances in. The stage has been dark since, though we are working hard behind-the-scenes to get the company ready for production whenever it is safe to bring crowds together in large groups again.
Being in theater usually takes up a lot of my free time. At first, I thought this time of social distancing would lead to a lot more time to write. However, I found creativity was kind of sparse in those early months. It also did not help that I love to write about sports and the sports world had also come to a screeching halt.
Admittedly, I would have rather seen the sports world stay on pause until things regarding the pandemic had been more sorted out. The leagues slowly returned, however, and I began to write again for two websites: Chowder and Champions and Bronco Nation News (Boise State. Not Denver).
Slowly, the creative juices began to flow again and I got back to a steady diet of writing every night. There is nothing new out at the moment, but I hope to have my third fantasy novel published sometime in 2021. Also began work on a new play while editing others, along with some edits on screenplays so I do have plenty of projects on the burner at the moment.
In related news, it is wonderful to hear from so many of you regarding Of Snow Forts and Santa. The kind words you sent, the positive reviews you've posted, and to hear you're enjoying the book not only for yourself but sharing it with the kids in your life is heart-warming. I am so grateful for all of it.
Before the writing really kicked in again, I was mostly catching up on a lot of television and films. Holed up in my apartment, I also began to do puzzles again and even bought a model car to put together. There was a certain aspect I enjoyed about reconnecting with hobbies from my youth. However, things may have went too far on this evening pictured below: 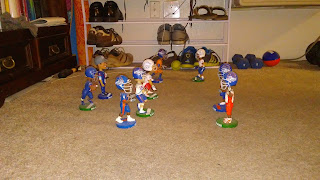 Once I moved out of the "staging bobbleheads in football games" portion of the year, I began to take more walks along the Boise River. Initially the gyms were close so finding ways to keep the cardio up was a must. And the greenbelt along the river was the perfect solution. I also found solace in having play discussions over Zoom and using apps like this and other social media platforms to stay in touch and reconnect with old friends. Or, in some cases, talking with my nieces and nephew.
Wanting to be with my sister and her family more so in the last 14 months, it was tough having them on the other side of the country. Thanks to a steady stream of messages throughout the months – and the occasional video call – made life not as lonesome. Plus, it's always fun to receive a voice message with a niece singing "We Wish You a Merry Christmas"... in October.
All in the family are well, including mom and my brother. We are all trucking along, as the old saying goes. That is an old saying, isn't it? Perhaps it should be. It reminds me of a popular cheer from the olden days of the late 1980's:
"T.
T-R-U.
T-R-U-C-K keep on truckin' all the way.
T. T-R-U..."
Okay. I'll stop. The randomness of what stays packed away in my memory is beyond me. On this day, I'd like to blame it on the spiked eggnog but that's not the case. Yet.
Wishing everyone near and far a happy Christmas, merry holidays, and healthy 2021. Onward and upward, as they say.
Be well. Be bold. And be kind.
Christmas Christmas Letters