The Muppet Show: Muppet power, after all these years 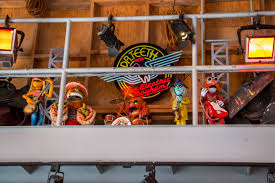 The original episodes of The Muppet Show arrived February 19 on Disney Plus with all five seasons now streaming. But it's not as if this motley crew ever really disappeared.

It's clear from the very first episode that Jim Henson's The Muppet Show was aimed at much more than providing entertainment for only children.

The uber-talented Rita Moreno was the first special guest and was immediately dropped into a barroom brawl, kicking off the show with action and comedy. This was followed up by a second episode in which Sandy Duncan joyfully sang about gulping down a whiskey sour and being a nice girl in what could be considered a dive bar.

They certainly played the music, all right, and they certainly lit the light and, in the process, created characters we have loved and embraced for years.

This cabaret of puppets has been delivering laughs for ages now and, 45 years later, Kermit the Frog, Miss Piggy, and company are still bringing joy to audiences, young and old alike. Henson began his work with puppets back in the 1950s and early 1960s, making commercials for a company called Wilkins coffee (even then we should have known Henson wasn't going to make a show simply for children). And while Kermit had been in the spotlight prior, it was with The Muppet Show in which the Muppets really took off.
In re-watching the first two episodes, I found I could not stop smiling throughout as I experienced the right mix of nostalgia, creativity, and jokes that (mostly) have stood the test of time. The familiar faces danced across the screen, delivering sketches and breaking the fourth wall on occasion.
The not-so-familiar faces were there, too. Muppets that have been long forgotten, at least in this writer's mind. Sweetums, the long-legged Muppet, was not one of them but there was a collection of other human-sized Muppets that graced the screen in these early episodes.
All told, these first few episodes I regaled in provided an amazing reminder of how much love I used to carry for The Muppet Show.
According to tales from my mother, the opening theme song had me running towards the television, no matter where in the apartment I was. The rumors will let one know that I danced along right there with the Muppets. I was there for them and they were there for me, at least in youth.

The Muppets in film and television

Everyone who has been beholden to Muppet lore has a favorite character. Fozzie Bear, the great comedian, and Rowlf the Dog were two who topped my list. Years later, vainly attempting to recollect as to why, the reasons escape me. Those are the two, however, that stuck with me through the years.
There were plenty of films during and after the show's run to keep fans busy, beginning with The Muppet Movie in 1979. While The Muppets Take Manhattan, The Muppet Christmas Carol, and Muppet Treasure Island all hold special places in my heart, it is The Great Muppet Caper that I am hopelessly devoted to. Somewhere buried in a collection of VHS tapes sits this film, one I watched on repeat once upon a time. A jewel heist and Charles Grodin falling in love with Miss Piggy is enough to keep anyone entertained. Set the action overseas and one is definitely in for a treat.
After 1999's Muppets from Space, the Muppets took a break from the big screen. It was in 2011 when they made their triumphant return to cinemas as The Muppets. And what a return it was. Led by actor/writer Jason Segel, the Muppets were back to save their legendary theater and used the help of Jack Black, Amy Adams, and Zach Galifianakis, to name a few, to do so. And of course, the film produced this pleasing moment with Rowlf.
A sequel was released in 2014, bringing the total of eight films featuring our beloved Muppets to grace the big screen. The television show was also relaunched briefly in 2015 on ABC, lasting only one season.
For 90s kids, there was also the Saturday morning staple Muppet Babies. This cartoon re-imagined the Muppets, as the title indicates, as babies, where they got up to their trademark antics. (I also just learned this show made a comeback on Disney Junior in 2018.)
No matter when or where you first enjoyed something from the Muppets universe, it's likely you have a story to go along with it. It could be jamming out with Dr. Teeth and the Electric Mayhem or scheming with Gonzo or simply baking in the kitchen with The Swedish Chef. No matter the case, there's no doubt you have favorite characters to love and admire. Even if it's the original grumpy old men, Statler and Waldorf (with all due respect to Walter Matthau and Jack Lemmon).
The Muppets are proving to be a timeless creation, thanks to the likes of Henson, Frank Oz, and many, many more. Sit back, relax, and enjoy the show.
Now, about that banana sketch...
photo credit: Wikimedia Commons