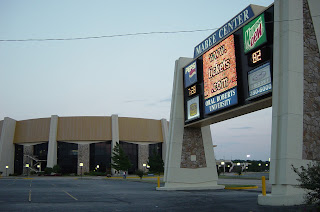 Lower seeds had plenty to say on the opening day of the 2021 NCAA men's tournament, starting with the Oral Roberts Golden Eagles.

The Big Ten led all conferences with nine teams selected for the NCAA men's tournament in 2021. By the end of day one, plus a round of First Four games, conference representation was down to six, including the slaying of higher-ranked seeds.

Oral Roberts (17-10) got the party started early on Friday. The 15th-seed Golden Eagles shocked the South region's 2nd-seed Ohio State Buckeyes 75-72 in overtime for their first win in the NCAA tourney since 1974.

The Golden Eagles led from the get-go, racing out to a 7-0 lead and carrying a 36-33 lead into halftime.

Ohio State (21-10) battled back and was able to take the lead heading into the game's final minutes. It looked like the Buckeyes were going to stave off the upset-bid but Oral Roberts refused to go away, ultimately tying the game at 64 by knocking down two free throws with 14.9 seconds left.

The Buckeyes had a contested look that didn't go and the teams marched to overtime.

Oral Roberts took control early in overtime and this time was able to stem the tide on an Ohio State comeback. Trailing 72-69, Ohio State had a chance to cut into the lead but star Duane Washington Jr. missed two free throws. This forced the Buckeyes into fouling and the Golden Eagles connected on just enough to pick up the victory.

The nation's leading scorer Max Abmas had 29 points for Oral Roberts, connecting on five of the team's 11 three-pointers. Kevin Obanor led the way for the Golden Eagles with 30 points and 11 rebounds.

E.J. Liddell led Ohio State with 23 points, 13 rebounds and 5 assists, but also had some key turnovers down the stretch. Washington finished with 18 points and 10 rebounds as the Buckeyes held a +15 advantage on the boards.

Ohio State was 5-23 from three-point range.

Oral Roberts victory was the ninth time a no. 15 seed has knocked off a no. 2 seed in the men's NCAA tournament.

The game was also one of three overtime games played on the day, including another upset in the South region.

Overtime basketball has clearly not been the friend of the Big Ten here in the first handful of games. The no. 4 seed Purdue Boilermakers (18-10) were the latest to find this out.

The recipient of the upset-victory was 13-seed North Texas (18-9), as the Mean Green picked up their first-ever NCAA tournament win with a 78-69 victory.

North Texas led most of the way, leading by eight points at halftime. Purdue clawed their way back, almost willing themselves to get back into the game.

Tied at 61 with 21.3 seconds left, the Mean Green had a chance to win the game in regulation. After nearly throwing the ball away, North Texas had a decent look that simply didn't fall.

It was no matter, though, as North Texas controlled overtime with swagger that turned into success. Purdue also missed their first nine field goal attempts in the extra period, helping put a dagger in their hopes.

Four players scored in double figures for the Mean Green. Javion Hamlet was a force all over the court, leading the way with 24 points, 12 rebounds, and 5 assists. Mardrez McBride and Thomas Bell added 16 apiece.

The Oregon State Beavers added their name to the special oddity that is the 12/5 seed line of the men's NCAA tournament.
Oregon State (18-12) led wire-to-wire in handling the Tennessee Volunteers 70-56 and guaranteeing right off the bat a 12-seed victory in this year's tournament.
The Beavers led by as many as 20 points and placed four starters in double figures in winning their fourth-straight game. Roman Silva led the way with 16 points and Ethan Thompson pitched in 13. Thompson also had 10 rebounds.
Tennessee (18-9) was 5-26 from beyond the arc and shot only 33.3 percent on the day. Keon Johnson led the Vols with 14 points.

Three of the top eight seeds in this region have been eliminated, including the no. 8 seed North Carolina Tar Heels (18-11).
In what had all the pre-game makings of a first-round classic, the game was anything but as Wisconsin (18-12) won in dominating fashion, 85-62. The ninth-seed Badgers connected on 13 three-pointers and UNC wasn't even close after the game's first ten minutes.
Brad Davison had 29 points and Dmitrik Trice added 21.
The South region began the day with an overtime affair, with the no. 7 seed Florida Gators (15-9) defeating the Virginia Tech Hokies (15-7) 75-70.
Florid stormed back down the stretch thanks to the play of Colin Castleton. Castleton had 19 points, 14 rebounds, and three blocked shots.
Nahiem Alleyne had 28 points for the Hokies, scoring 14 straight at one point at the end of regulation and overtime.
Baylor (23-2), the region's top seed, won with ease. And no. 3 seed Arkansas Razorbacks (23-6) were down by 14 in the first-half against Colgate (14-2), but used a 17-0 run to close the half and an ultimate 85-68 victory.
The fifth and sixth seeds both won, with Villanova (17-6) righting their ship with a victory over the Winthrop Eagles (23-2). Texas Tech (18-10) held off quite the effort from Utah State's Neemias Queta to win 65-53. Queta scored 11 points, pulled down 13 boards, blocked 7 shots and dished out six assists.

The 5, 6, and 7 seeds in the Midwest region have all been eliminated, though outside the Oregon State game, none were quite the shockers that occurred in the South region.
The biggest perhaps, even as many pundits were predicting it, belonged to the 10th-seed Rutgers Scarlet Knights (16-11). Rutgers picked up their first NCAA tourney victory since 1983 with a 60-56 win over the Clemson Tigers (16-8).
Syracuse connected on 15-27 three-point attempts as the 11th-seed Orange knocked off the no. 6 San Diego State Aztecs (23-5), 78-62. Buddy Boeheim scored 30 points for Syracuse (17-9), hitting 11-15 (7-10 from three).
San Diego State went scoreless for nearly the last 10 minutes of the first-half after taking an early six-point lead. The Aztecs ended the game by going 11-40 from deep.
The 13th-seed Liberty Flames (23-6) nearly joined the Cinderella party but, after leading a majority of the game, ultimately fell to Oklahoma State (21-8), 69-60.
Top-seed Illinois (24-6) won with ease as did the region's no. 2 seed Houston Cougars (25-3).
Eighth-seed Loyola Chicago (25-4) defeated Georgia Tech (17-9), 71-60 and third-seed West Virginia (19-9) held off a valiant effort by Morehead State (23-8), winning 84-67.
West Virginia head coach Bob Huggins picked up career-win 900 with this victory, becoming the sixth Division 1 coach to reach this feat.
photo credit: Wikimedia Commons
Loyola Chicago march madness NCAA North Texas Oral Roberts Golden Eagles Oregon State Beavers