Finding the right balance between writing and a social life 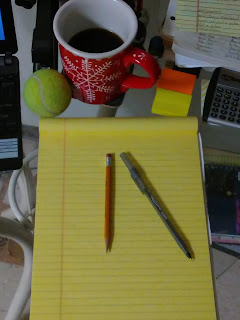 “I should never be left alone with my mind for too long.”-Libba Bray

There was a moment not too long ago I came to the realization I’d been spending too much time alone with my own mind.

I was taking a few minutes away from my daily writing when the epiphany occurred. I had stationed myself in front of the t.v., mindlessly (or so I thought) watching an episode of less-than-stellar show. The show itself is not important. What’s important was the simple fact that on the night in question I found myself talking to the t.v. show. I asked a question of one of the characters on the show and, in a different voice, answered my own question.

I panicked. How long had these conversations with myself been going on? Why were my collectible bobbleheads moved from their shelves and placed in a circle? To my surprise, I hadn’t taken the life-size cardboard cutouts I’d acquired from my days of working at a movie theater out of storage. Finding them in my apartment may have sent my mind into a tailspin.

Relief now washing over me, I knew it was time to reclaim my social life. And fast. I just needed to figure out how.

Don’t forget about the outside world

The life of a writer, as many of you are well aware, requires a fair amount of solitude and isolation in order to accomplish goals and to complete assignments. Habits of writers vary but if you are committed to writing, hours will be spent at a desk or in front of a computer crafting a sentence, a stanza, or a story until it’s just right.

Sometimes, those hours alone turn into days. Days stretch into weeks, weeks into months and soon you realize you haven’t left the house in months except for reasons involving the bare necessities in life. Your social life has become non-existent and you’ve stepped into a world in which talking to yourself has become the norm.

As valuable as dedicating yourself to your craft is, there is also great value in retaining a shred of a social life. At the very least, even if being social isn’t quite your thing, there are plenty of places to go write that don’t involve sitting in the confines of your home. Getting outside might be the first step in reclaiming your sanity.

A local bar or pub can not only be a great place to be social, but these places can also be a great source of inspiration. Now, I’m not saying you should go out and drink like Charles Bukowski. In fact, it’s highly recommended that you don’t delve that deep into the liquor bottle. Having a drink at a bar, whether it be alcoholic or not, brings both the writing aspect and social life together to the same spot.

Plus, as far as cliches go, the ol’ watering hole is far better for studies in character than your average coffee shop.

No matter what type of writing you do, whether it be blogging, freelancing, playwriting, or fiction writing, a fair amount of time will be spent by yourself. It’s the harsh realization that many writers will come to accept as they develop their craft.

One way to combat the isolation and actively hold a connection to the social world is to join a writers group. Chances are that if you’re a writer you know other writers within your community. A simple look into your local paper (or its corresponding website) might bring you the information on said groups. Worse comes to worse you can always start your own group and bring the writers to you.

Even meeting twice a month can help keep your sanity in check and even help with your writing. Being able to bounce ideas and discuss characters, projects, and stories with like-minded individuals can lend itself to incredible discoveries. In addition, you’re given the chance to interact with someone other than yourself or your cat.

As writers, you know how hard it can be to shake up your writing routine. Having even an iota of a social life doesn’t need to interfere with the routine.

Of course, writing groups and going to the aforementioned drinking establishments are only a few suggestions, each that have worked for me in the past in breaking up the monotony of isolation. You can make more time for friends, hang out with a significant other, go to a concert or music festival or join a knitting group, it doesn’t matter. Finding that right balance between being a writer and having a social life is the key.

It may seem like the furthest thing from your mind but having a social life (or even directing a play to break up the routine) helps to create the world, the characters, and the stories that you desperately want to write about. Not being alone with your own mind and participating in a social life brings a breadth of knowledge and experience. Without it, you’re simply left talking to your television, hoping it doesn’t one day respond back.
Creative Writing Life's ambition