Saturday nights in the winter abyss 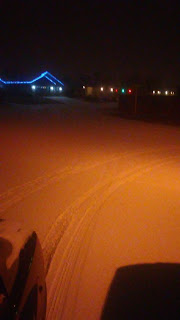 Next week will be the 2017 edition of the Christmas newsletter. This week I do a little free writing. And tomorrow, to steal from 'Spaceballs', bingo.

Saturday nights sure aren't what they used to be.

Weekend nights used to be spent at the bars. A Friday thru Sunday punishment to the brain and dulling of the senses. Wake up Saturday morning with a hangover? No worries. Saturday night would arrive soon enough.

..I'm watching the San Diego Los Angeles Chargers currently lose to the Kansas City Chiefs, drinking the first of what will probably only be two beers on that night. (They are tall cans so I guess that's something.) Even if there wasn't a football game on, I might very well still be staying in for the night.

I've been a bit of a recluse over the past few years. The nights of bar hopping -- for the most part -- are behind me. Those night hold wonder and fantastic memories, but I'm much more focused these days. And I'd like to settle down.

The irony of that is one has to go out to meet someone to settle down with. In getting a little personal, I haven't done much in the way of meeting new people. I don't use Tinder or any other sort of dating app. And it seems the women I've met over the past few years who I've shared common interest with and wanted to get to know more about turned out to already be in a relationship. I'll be the first to admit effort on my behalf has been limited. And a heavy focus on writing over the past few years has driven me slightly away from an attempt at a social life.

Slowly learning to balance both again.

Maybe I should get out instead of watching this game and switching back and forth between Christmas movies I've seen multiple times.

Speaking of which, I've got a bone to pick with the Santa Clause movies. In the second one, our hero Scott Calvin/Santa Claus (Tim Allen) is forced to find a wife or risk losing his job title. Okay. That's fine and all but it begs the question: What happened to Mrs. Claus of the Santa Claus who Scott Calvin replaced? Did she disappear when the Santa from the first movie fell of the roof? Was that Santa unmarried? I suppose these are questions I can throw into this Christmas post from years ago.

And for the love of Santa, these "dilly, dilly" commercials need to stop and go the way of the "hold my beer" sayings and "crying Jordan" memes. Enough is enough.

They all may disappear soon enough if net neutrality is changed. In fact, The Journey of Now blog may be buried deeper into the internet than it already is. Perhaps it's time to step away from the internet and start connecting on a truly personal level again.

Of course, the internet is so prevalent in all of our lives that it needs to be considered a utility, like water or power. People depend on the internet for paying bills, looking for jobs, staying connected to relatives across the globe, and simple everyday tasks that it is needed to survive. Yes, society did it for a long time before the internet was invented, but the convenience of things helps in so much on a day-to-day basis.

Plus, my job relies on the internet and it's functions.

There is so much more to worry about in this country than just the internet. A collection of slime only grows bigger in Washington, D.C. This pile continues to set this country back hundreds of years. Politics over country, racism over progress, hypocrites over rational thinkers, and a needlessly incessant fear mongering chief who is dividing this country even more.

I'm tired of wasting my words on him and his cohorts. But the resistance cannot rest. Ol' 45 and his cronies attempt to wrest rights from woman, people of color and those of the LGBTQ community. The powers that be attempt to deny science, they sexually harass, they want to take away basic human rights. Their slime grows like the slime in Ghostbusters II. The slime grows not just out of hate, but out of bigotry, sexism, greed, and a lengthy list of other transgressions.

Resist and chip away one day at a time. It will all come falling down, their party or the country. Let's hope it's the former.

Boy, this free writing exercise really took a sharp turn. I wish I could always talk about random things, like Saved by the Bell, Christmas movies, and the bars I've visited in Boise. Sometimes, though, life in this country needs to be talked about.

Can't be blind to it. Will not live life like everything is okay in America and this world. Because it's not. I'd rather be positive than negative. There's too much negativity already present.

But sometimes it bleeds into this blog.

At least Boise State beat Oregon in the Las Vegas Bowl. There's that. Oh, and probably a new Christmas movie on the Hallmark Channel.

That'll pass the time this evening. And of course, another glass of beer cheer.