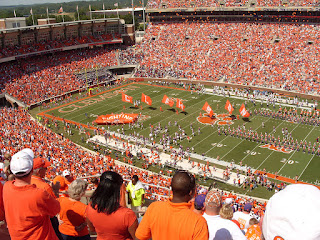 The 21st-century has not been kind to running backs in regards to winning the Heisman trophy. Since the year 2000, only two have received the prestigious award.

Running back Travis Etienne might have had one the quietest dominating seasons of all time. Outside of the Clemson Tiger fan base, it seems little thought was given to Etienne as a possible Heisman winner.

Etienne, a sophomore, put together one of the better individual performances of 2018. He finished with 1463 yards and 21 touchdowns on the ground. Above average, yes, but punctuated even more by the fact Etienne averaged 8.3 yards per carry.

Five games in 2018 saw Etienne average ten yards or more per carry for Clemson (13-0). He had seven games in with over 100 yards, including once when it went over the 200-yard mark (203 vs Syracuse). Etienne had seven games with at least two rushing touchdowns, three of those in which he had three scores.

In the games Etienne failed to reach 100 yards he either had limited carries or -- in the case of games against Florida St. and Boston College -- faced the top-two defenses in the ACC. In these games, Etienne carried 21 times for 123 yards (still nearly six yards per carry).

All of this was not enough for Etienne to garner an invite as one of the finalist to the Heisman ceremony on December 8.

Back in 1998 and 1999, the Heisman was handed to running backs in back-to-back years, with Ricky Williams and Ron Dayne taking home the prize.

Since then, only Alabama running backs Mark Ingram (2009) and Derrick Henry (2015) have represented the position with a Heisman win.

Ingram had 1542 rushing yards and 15 touchdowns to go along with 322 receiving yards and three more scores. Henry set an SEC single-season rushing record with 1986 yards and added 23 touchdowns on the ground.

Etienne's numbers were similar, yet he wasn't able to crack the quarterback stranglehold that has extended to 2018.

Etienne may have been earned an invite, but this is not to say the three quarterbacks who were selected are not undeserving.

Dwayne Haskins of Ohio State (12-1) is the latest in a long line of great Buckeye quarterbacks. He led the nation in passing yards (4580) and touchdowns (47) while throwing only 8 interceptions. Haskins also had 122 yards on the ground and 4 scores.

Kyler Murray -- who came back for his junior season despite maintaining he doesn't know if he has a future in football after this season -- led Oklahoma to a 12-1 record and berth in the College Football Playoff.

Murray threw for 4053 yards (3rd in the nation) and 40 touchdowns (2nd) with 7 interceptions. Murray was just as impressive with his feet, running for 892 yards and 11 touchdowns.

Sophomore Tua Tagovailoa led the Alabama Crimson Tide (13-0) to yet another perfect record. He did so while barely seeing action in the fourth quarter in many of Alabama's games. Tagovailoa finished with 3353 passing yards, 37 touchdown passes and only 4 interceptions. He had 190 yards on the ground and 5 more scores.

These three schools wouldn't be where they are without the play of their quarterbacks. And the same can be said for Etienne and Clemson. The question is how these schools would have performed without these players.

Without Haskins and Murray, Ohio State and Oklahoma would likely have at least another loss or two to their names. Etienne maybe less so and, while Tagovailoa is an extremely important asset, the Crimson Tide have found ways to win without him in the game.

One quarterback will join the 15 others who have won the Heisman since 2000. Five of the last seven selections are currently starters in the NFL. Both running backs currently see significant action for their college teams.

Does a Heisman win always translate to success? This answer tends to go in cycles, with some finding success and others lasting barely three years in the league. No matter the case, whoever wins will find themselves in extremely good company.

My Heisman vote (if I had one): Murray, Haskins, Etienne, Tagovailoa