Game of Thrones: Not so quietly into the long night 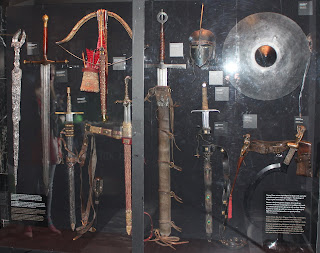 Warning: To loosely paraphrase Melisandre, the following post is in-depth and full of spoilers. If you aren't caught up in season 8 of Game of Thrones, beware.

The week has passed, allowing me to fully ruminate on the events of "The Long Night", episode three in the 8th season of Game of Thrones.  For 82 minutes, there was (mostly) gripping action, battles between dragons, a Dothraki light brigade (visually stunning), an outstanding and beautiful score and plenty of heroes to go around.

We witnessed soulful exchanges between characters in the crypt and a giant slayer in Lyanna Mormont (Bella Ramsey), showing right until the end she was one of the most powerful women in Westeros.

There were deaths, there was fire AND ice, and there were many fans vocalizing their thoughts on the lighting quality of the episode.

Let's start with that.

Watching from my laptop -- by no means top of the line -- there were very few moments in which I thought, "I can't see a thing?" Were there moments of confusion and uncertainty? Yes. But I imagine that was an intentional decision, made to aid in the full-on intensity of battle. (I don't doubt the veracity of these claims by fans. I have the same issue with certain scenes on The Walking Dead while watching on my television.)

By setting the battle at night, it led the story to a dawning of a new day; the aftereffects of the battle giving new hope with the ultimate prevailing of the Lord of Light. If set in the daylight, the entire episode might have not had the same effect. We see everything and tension may have been taken down a notch. The one issue with lighting I did have was being able to see the wights as they attacked. Of course, it can be argued this was done for the very reason of the viewer also needing to keep their head on a swivel.

And it wasn't like the episode was going to simply gloss over any main or secondary character who happened to meet their demise. Director of the episode, Miguel Sapochnik, did a good job of giving a close-up or extended scene as needed, whether it be the death of Dolorous Edd (Ben Crompton) or the valiant efforts of Beric Dondarrion (Richard Dormer), Theon (Alfie Allen) or Jorah Mormont (Iain Glen). There was a balance of suspense and scenes for the majority of the fighters in Winterfell. As dark as the night was, there was a good sense of who had died and who had survived, verified with the quick shots at the end of the episode of our heroes standing over the dead.

Heading into the episode, my fear was a total annihilation of characters not named Stark, Lannister, or Targaryen. Valiant Lannisters, brave Starks, and erroneous Targaryens all survived, plus pretty much every other key player outside of a handful.

Night King vs Jon Snow (Kit Harrington) for all the marbles was the expected outcome at some point this season, something the show had been building to for years.

That answer was the same as Arya's (Maisie Williams) answer to Melisandre (Carice van Houten asking her about what they say to the God of Death: not today.

Frankly, I'm more than okay with this. Arya has been preparing for this moment since she first fired an arrow in the very first episode of the show. From training with a dance master to learning battle tips from the Hound (Rory McCann) and honing her craft with Jaqen (Tom Wlaschiha), the writing should have been on the wall.

She's one of the most badass warriors in all of Westeros. Silent and deadly, her stealth and combat skills were on full display the entire episode. I have no trouble believing she used her unique set skills to move past the White Walkers with precision. (Okay. Maybe a little suspension of disbelief was needed. But we are watching a fantasy show, after all.)

The episode had dug its long, icy fingers into me at this point. All hope had left and they'd thrown everything they'd had at the Night King -- outside of burning the wights with dragon fire when they were trapped behind the trench. I mostly don't understand that, outside of it would have hindered the plan of luring out the Night King.

With three episodes left, I knew they had to survive this battle somehow but was unsure how. Even when Arya performed her very own version of an RKO out of nowhere, I audibly gasped when the Night King snatched her by the throat.

Followed immediately by a loud yell that alerted neighbors three doors down.

Arya and company survived another day. Question remains: Will she complete her list? Or has Arya said not today one too many times?

Thanks to all who have been participating so far. We're down to our final four quotes/lines of dialogue. A few surprises to me but all very good nonetheless. This week's matchups:

Thanks for playing along. The last week of voting will be the week leading up to the final episode.

Coming later in May: A new pop culture tournament focused on the summer movies of 1999.
photo credit: commons.wikimedia.org
Game of Thrones Maisie Williams Night King Vladimir Furdik
Jason Haskins
I am a playwright, screenwriter, novelist. My novels "The Dragon Princess" and "The Blue Gem" are both available at the Kindle store on Amazon. To learn more, be sure to visit jason-haskins.com or follow me on Twitter: @jasonrh_78