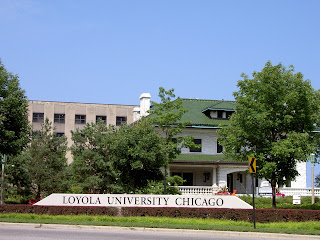 The round of 32 in the 2021 NCAA men's tournament saw higher seeds continue to fall in another exciting day of basketball action.

Call it magic. Call it the prayers of Sister Jean. Or simply call it an underrated team proving they have something fantastic brewing. No matter the case, the Loyola Chicago Ramblers are headed back to the Sweet 16.
Garnering goodwill from a nation of fans, similar to the Ramblers Final Four run in 2018, Loyola Chicago (26-4) is once again turning into basketball darlings in the NCAA men's tournament.
Different in 2021, however, is that Loyola Chicago should no longer be considered a "Cinderella story". In pulling off the upset of the Midwest region's no. 1 seed Illinois Fighting Illini (24-7), the Ramblers have made a statement that they are here to stay.
Eighth-seed Loyola Chicago began the tournament falling behind early in their opening-round victory over Georgia Tech. On Sunday, there was no such problem as the Ramblers led wire-to-wire in defeating Illinois 71-58.
Timely shooting, harassing defense, and the play of Cameron Krutwig were main reasons for the Ramblers victory.
Krutwig did a little bit of everything on Sunday against Illinois. He scored 19 points and pulled down 12 rebounds while also dishing out five assists. Krutwig also had four steals on the day,
The Ramblers shot 51 percent from the field and had 12 steals as their defense frustrated Illinois throughout the contest.
Kofi Cockburn had 21 points and 9 rebounds for the Illini. Star guard Ayo Dosunmu struggled, going 4-10 from the field and committing six turnovers.
Loyola Chicago will face no. 12 seed Oregon State in the Sweet 16 next weekend.

Once again, head coach Jim Boeheim and the Syracuse Orange (18-9) are proving the naysayers wrong.
Perhaps to be lucky to be in the tournament at all, 11th-seed Syracuse delivered again from three-point land again in defeating the Midwest region's third-seed West Virginia Mountaineers 75-72.
Syracuse led most of the game, only to allow West Virginia (19-10) to crawl back. The Mountaineers found some range of their own and, coupled with Syracuse's struggle with the press and missed free throws, made it a close game by the end.
The Orange and Buddy Boeheim, in the end, proved to be too much.
Syracuse hit 14 three-pointers, six coming from the younger Boeheim. He finished with 25 points as Syracuse advanced to the Sweet 16 for the third time in the past six tournaments.
Meanwhile, over in the South region, the players from Oral Roberts (18-10) continued to be golden.
Down 11 in the second-half, the 15th-seed Golden Eagles battled back and earned their first-ever trip to the Sweet 16 with a 81-78 victory over the Florida Gators (15-10).
Despite a 33 percent (10-30) mark from three-point range and a minus 13 advantage on the boards, Oral Roberts was able to piece together a victory. Kevin Obanor continued his exceptional tournament play with 28 points and 11 rebounds. Leading scorer Max Abmas contributed 26 points, going 12-12 from the charity stripe.
Adding to this surprising list, while also keeping the Pac-12 Conference undefeated in this year's tournament, was the no. 12 seed Oregon State Beavers (19-12).
The Beavers were on point after starting the game 1-11 from the field. They had a lead that grew as big as 18, fended off an Oklahoma State comeback, and defeated the fourth-seed Cowboys 80-70.
Oklahoma State (21-9) was able to cut the lead to two in the second-half but, down three with a couple of minutes on the clock, went cold and watched as Oregon State sealed the game from the free throw line (connecting on 32-35 overall. Knocking down your free throws does pay off).
Despite committing 20 turnovers, Oregon State was able to win in large part thanks to a rebound advantage of 22 over the Cowboys. Roman Silva and Warith Alatishe each had 12.
Ethan Thompson had 26 points and 7 rebounds for the Beavers.
Along with the rebounding disadvantage, a poor-shooting night did Oklahoma State in. The Cowboys shot only 27.7 percent from the field. Cade Cunningham led the way with 24 points but was only 6-20 from the floor.

The rest of the South & Midwest regions

The Rutgers Scarlet Knights (16-12) had a solid chance to be the last Big Ten team remaining on the South/Midwest side of the bracket heading into the Sweet 16.
Instead, the Scarlet Knights joined Illinois and the Wisconsin Badgers in heading back home today.
Rutgers was in control much of their game against the Houston Cougars (26-3). The Scarlet Knights were up by nine with 4:33 remaining. But the offense stalled, scoring only two points the rest of the way, and Houston pulled off a come-from-behind 63-60 victory.
Houston's Quentin Grimes had 22 points and nine rebounds.
Wisconsin (18-13) never quite located their deep threat scoring from their opening-round victory over North Carolina. The Badgers were only 8-21 from deep as the South region's top seed Baylor Bears (24-2) won 76-63.
Baylor shot 45.5 percent from the field and were led by Matthew Mayer, who had 17 points and 6 rebounds off the bench. Guards Jared Butler and Davion Mitchell each scored 16, with Mitchell dishing out eight assists.
The Bears will play fifth-seed Villanova, who advanced with a 84-64 victory over the North Texas Mean Green (18-10). The Wildcats (18-6) had four players score in double figures, committed only six turnovers and shot 55.4 percent from the field, including a 15-30 performance from three-point range.
Closing out the South region, the third-seed Arkansas Razorbacks (24-6) won a nail-biter over the sixth-seed Texas Tech Red Raiders, 68-66. Arkansas built a lead in the second-half after being down by 10 for parts of the first half. The Razorbacks were able to fend off a Texas Tech comeback and a missed Red Raiders (18-11) contested layup at the end of the game.
Arkansas placed four players in double figures. Justin Smith scored 20 points on 9-11 shooting and pulled down six rebounds. The Razorbacks were 4-17 from deep but committed only nine turnovers.

The Sweet 16 will be set by the end of the day on Monday. And while this side of the bracket hasn't experienced as many upsets, there are opportunities for lower-seeded teams to advance.