Christmas Favorites Tournament: A sleigh full of 'A Christmas Carol' 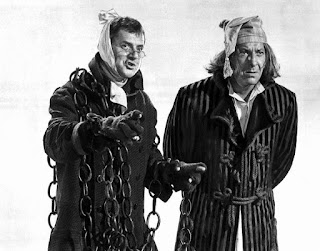 A Christmas Carol is a timeless story enjoyed by multiple generations during the holiday season. Judging by the number of remakes in film this story has endured, Hollywood is pretty big on it as well.

What's your favorite version of A Christmas Carol by Charles Dickens?

Is it the Albert Finney version, Scrooge, from 1970? Or maybe Bill Murray's take on the main character in 1988's Scrooged is more to your liking.

Could it be the animated classic Mickey's Christmas Carol from 1983? Or – though it’s not a film – maybe you simply like the Saved by the Bell Christmas episode in which the gang puts on a play version of A Christmas Carol in the center of a mall.

Finding a consensus on a favorite film adaptation might take years.

The original A Christmas Carol was written by Charles Dickens and published in December of 1843. Over the years, various iterations stretching across fiction and stage have appeared.

The film world is no different, with at least 21 films – animated and otherwise – produced over the years. This includes six different films with Scrooge as the title (plus one Scrooged in the mix). This doesn't even include the numerous television films, direct-to-DVD, sitcom related "Visited by Three Ghosts" theme or the Kelsey Grammar television musical version.

The "12 Days of Christmas" film tournament of 2018 began with eight films relating to/titled A Christmas Carol. One could imagine running this thing with just a list of all the versions of A Christmas Carol that have appeared over the years.

For the time being, however, we will focus on the task at hand, in which four of these films advanced past the first round and into the round of 32. And considering Ebeneezer Scrooge was visited by four ghosts on that fateful Christmas Eve, it's only fitting we have four A Christmas Carol themed movies still alive.

There were very few surprises in the "classic movie" region. Three animated films, included in this tournament for the sake of holiday nostalgia, all advanced, plus films with Judy Garland and Bing Crosby.

The one minor upset occurred between 8th-seed Holiday Inn and 9th-seed Babes in Toyland (1961).


Ray Bolger starred this version of Babes in Toyland. Bolger might be best known for his role as the Scarecrow in The Wizard of Oz, which starred Garland, and that's how you get to Kevin Bacon. No, that doesn't work. Moving on...

Higher seeds for the most part prevailed in this region, with the top five seeds all advancing.

Mickey's Christmas Carol was the third film based off the Dickens' classic from the 1980's region to advance. This film defeated Ernest Saves Christmas in one of the most voted on matchups.

The eight films to advance:

Voters on the holiday films from the 1990's did themselves one better by voting to advance two films with double-digit seeds. Included as part of these two is the fourth and final A Christmas Carol stories to advance: The Muppet Christmas Carol.

Michael Caine, Kermit, Miss Piggy, Fozzie Bear and company took down Tim Allen and The Santa Clause in resounding fashion. (Allen put up big zero in this tournament, with all three of his holiday films failing to advance).

Also pulling off an upset (if judging by this tournament only) was the classic Jingle All the Way. Starring Arnold Schwarzenegger, Sinbad (of the mystical, magic movie Shazaam), Rita Wilson, and Anakin Skywalker himself (Jake Lloyd), Jingle All the Way handed defeated to The Preacher's Wife.

Here's your final eight for this region:

In the fourth and final region, not even one of the lower seeds advanced through to the next round. It took a couple of run-off races, but the higher seeds prevailed to live and see another day.

Voting will continue over on Twitter (@jasonrh_78 and Sports 'n' Stuff ). And new for this round, going forward thanks to a few requests, I will be spamming your Facebook feed with poll options.