Christmas film favorites tournament: And the winner is... 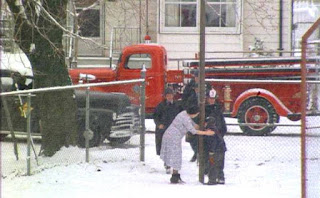 The message in A Christmas Story is loud and clear: If someone in the room is telling you "you'll shoot your eye out", it's probably best to listen.

In the holiday film A Christmas Story, it's all about listening.

Ignoring all rhyme and reason from the women in the film -- a mother and a teacher -- and one Santa who most definitely smells like beef and cheese, Ralphie's father (Darren McGavin) decides to buy young Ralph Parker (Peter Billingsley) a Red Ryder BB Gun for Christmas.

Lo and behold, Ralphie nearly shoots his eye out. Oh, the irony.

Of course, things go from bad to worse when Ralphie lies about nearly shooting his eye out, leading to a ruined turkey and the Bumpus' dogs getting the last laugh.

Merry Christmas to A Christmas Story, not only a holiday classic but also the winner of the 2018 '12 Days of Christmas holiday film tournament.

The 1983 film held on for a victory over the 1990 film Home Alone. After running neck-and-neck in the early voting. A Christmas Story won by a score of 29-21.

Based of the short story Grover Dill and the Tasmanian Devil by Jean Shepherd, this film delivers on messages of bullying, friendship, ratting out your friends, overdosing on meatloaf and mashed potatoes, and ways to deal with weird kids while waiting in line to see Santa.

Okay, so maybe there's something more simpler to unpack regarding this film. It is a little curious -- after (hopefully) acquiring knowledge and wisdom -- on how we look at holiday classics of our youth through the eyes of an adult. A piece of magic and nostalgic sentimentality will be ever-present but things might become slightly askew, especially a film you may have seen upwards of 50 times.

It starts small, perhaps noticing how many times the family eats red cabbage (an easy indication of social class of the family in question). Or a simple observation about a teacher who appears to not care that a kid walking late into class is sporting a fresh black eye.

The 24-hour marathon of A Christmas Story began in 1997 and it may have even been years before that in which the film became in an annual viewing tradition in my household. This was a tradition I even kept with me in the years after, especially on years I couldn't make it home, the film helping keep me company on those lonely Christmas Eves and Christmases.

A Christmas Story is one of the holiday films I watch every year (along with Bad Santa, Love Actually, National Lampoon's Christmas Vacation, and Rudolph the Red-Nosed Reindeer, to name a few among many). As with many of you who voted, A Christmas Story will always be near the top of my favorites list.

Home Alone and the other finalists

Home Alone survived the 1990's region and, by survived, I mean basically had a cake walk through the region. En route to its second-place finish, the film defeated All I Want for Christmas, The Ref, The Muppet Christmas Carol, Home Alone 2, and Elf.

After an easy route to the final four (was there help from Macaulay Culkin's Google Ads?), Home Alone and Elf were tied at 21 votes after the given day for voting. A quick four-hour poll on Twitter saw Home Alone take down Elf 7-6.

Elf, released 15 years ago, is considered a Christmas classic among many, even garnering the 24-hour treatment at various points. On more than one occasion this holiday season -- even outside the realm of this tournament -- I noticed people souring (or already there) on this movie, making me wonder if it has the staying power to be held in high esteem in 20 years.

Will Ferrell and company defeated Deck the Halls, The Holiday, The Polar Express, and Bad Santa on its way to the final four.

Thanks for following along the past couple of weeks. Hope you had a little fun along the way and maybe even were reminded of a few holiday films you'd forgotten about over the years.

We'll see you next time.