Showing posts from April, 2017
Show all

Unsurpassed Classic Television Shows Have No Need for Revival

photo:commons.wikipedia.org
Everything old is new again.
At least that appears to be the ongoing trend for television shows as of late. Roseanne, the groundbreaking hit sitcom that ran nine seasons in the late 1980's into the 90's, appears to be the latest "retro" show to hop aboard the nostalgia train. It was recently announced a revival is already in the works, in which Sara Gilbert, John Goodman, and star/creator Roseanne are all on board for.

Setting aside the fact Goodman's character and family patriarch, Dan, is deceased plus quite possibly a myriad of scheduling problems with Johnny Galecki (David) and Laurie Metcalf (Jackie)--not to mention the always busy Goodman--a much deeper problem of rebooting and continuing television shows is growing among the industry.
In what a few years ago--and still is--was a booming trend in the movie industry, television shows have now proven they are not immune to this tactic.
The clamoring of fans for reunion shows have n…
Post a Comment
Read more

Mess Around and Miss the Triple-Double 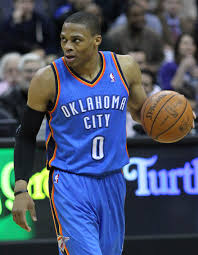 photo: Wikimedia Commons
Russell Westbrook was all in on Friday night in an effort to break Oscar Robertson's record for most triple-doubles in a single season.
What transpired in the fourth quarter of the Oklahoma City Thunder's blowout loss to Phoenix was the epitome of a me-first, let's-break-records style of play that pops up all too often in today's NBA.
This is not Kobe Bryant playing one-man ball in the swan song of his career. This is Westbrook--and his coach--deciding a fourth-quarter game in which they trailed by over 20 as an important time to try to set an individual record.
The Phoenix Suns--losers of 13 straight--denied Westbrook his 42nd triple-double and the Thunder a victory, winning 120-99.
Westbrook and the Thunder might say different, but leaving in the one man who could possibly carry your team to a playoff victory is nothing more than trying to set a record for record-sake.
And it's a perfect example of seeing how far an NBA player will go in …
2 comments
Read more
More posts