Showing posts from February, 2015
Show all

- February 18, 2015
EMMITSBURG, MD- Mardi Gras and Fat Tuesday celebrations were had all across the United States yesterday. Whiskey was drank, beads were given out, and breasts were shown.

For one man in Emmitsburg, all of that was missed.

Mark Davis, 31, of Emmitsburg, awoke Wednesday morning as he would every other day. As he brewed his coffee, Mr. Davis realized that today was Ash Wednesday. He had been to Church just three days prior but paid no attention to the service times for Ash Wednesday so he hopped on the internet. As he searched for local services and times, Mark had another sudden realization.

Ever since he'd turned 21, Mark had not missed a Fat Tuesday celebration. He had always looked forward to it. This was a day when he could drink as much as he wanted and stare at women's breasts without being judged . It was Mark's personal Christmas and this year it had completely slipped his mind.

The Lost Art of Romance

(Warning: The following post is more of a personal post. About romance and feelings. If this doesn't fit your fancy, please feel free to scroll down and look to your right. Plenty of other posts to choose from...)

Yes. I leave the question mark there on purpose. It is not a typo.

Let's go back in time. I was once a hopeless romantic. My beliefs about love and romance were based on finding that one person to spend your life with. I believed in grand gestures and surprises and the whole nine yards. It was truly my belief that no matter what happened, love would find you in the end. If that man or woman was truly the love of your life, then love would find a way.

My young heart was shaped not only by the love I saw between my parents, but by t.v. shows and movies. The love story of Cory and Topanga from Boy Meets World rivals any of those love stories throughout time. Theirs was one of fate and destiny. They had their issues (Topanga moving away. Cory…
Post a Comment
Read more

Jimmy Fallon Does it Again 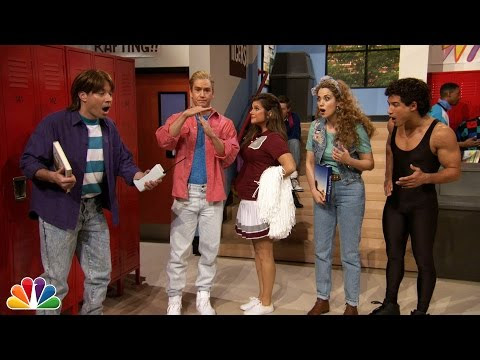 In his time hosting The Tonight Show, Jimmy Fallon has found the best way to acquire and entertain viewers is his nostalgia for the 90's. Sure, he has the Lip Sync Battles, Epic Rap Battles, and a few other bits that have piqued my interest. It is his love for Saved by the Bell that keeps me following him on Twitter. A deep, passionate love for Saved by the Bell is probably the only thing Fallon and I have in common. Well, that and we're both handsome. Oh, and that scene in Fever Pitch where Fallon is watching the Buckner video is also a favorite of mine.
Without further adieu:

I, for one, love that so many episodes were crammed into this 8 min video. Not necessarily through dialogue, but also through posters on the wall. "No Hope with Dope" "Save the Max" and a poster for the rafting trip were my favorites. It made me want to go watch all the episodes. I used to get my fix over at E! during the weekdays. Of…
Post a Comment
Read more

A Quick Recap of All Things Jason

- February 03, 2015
I'm a liar. I'll announce that right off the bat. This will not involve everything about Jason. The following will only recap the writing aspect of my life. The moral of this story: Don't believe all the headlines you read.

It's been a few months so I'll cut right to the chase. You're welcome.

In early January, I was able to start writing (on a volunteer basis) for a website focusing on the Boston sports scene. Chowder and Champions is the name of the website. You can also like them on Facebook if you'd like to keep up-to-date with your favorite Boston team.

My third full length play, The Latitude of Life, received a reading with HomeGrown Theatre. Very thankful for the opportunity and received some much needed feedback.

Of course, I am still writing with Bronco Nation News. All the football and basketball news that's fit to... well, what we all have time to write. Signing day is fast approaching and the basketball team is on a roll so there's been …
Post a Comment
Read more
More posts